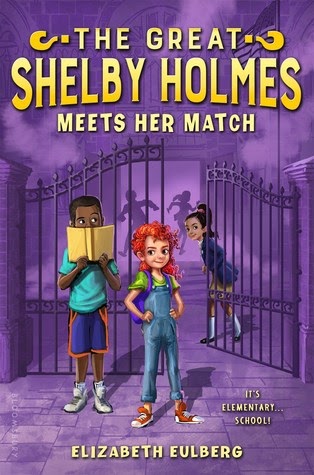 John Watson is used to being the new kid and this year is no exception. After solving a case with the intrepid Shelby Holmes, however, this time he’s certain that he can take the Academy with confidence. The only problem? Shelby. Or rather, his friendship with Shelby. It seems everyone at his school is jealous of or in fear of her – with good reason. Shelby’s already on the hunt again and this time the victim of her scrutiny is the new science teacher, Mr. Crosby. When their case becomes much more than a simple matter of theft, Watson and Shelby find themselves facing an opponent who is might even achieve the impossible and be even more brilliant than the young detective herself! Can Shelby and Watson beat out their clever enemy before it’s too late?

Elizabeth Eulberg has done it again with the second in her brilliant gender-bend version of Sir Arthur Conan Doyle’s famous detective. The author weaves a well-told tale, punctuated by humor, middle-school spirit, and a healthy dose of mystery. I highly recommend this book for younger readers, as they will love the relatable character of John Watson and his friendship with the brilliant young Shelby Holmes.

Before you read this book though, pick up the first one and check out my review on it at https://trinitygrau.wordpress.com/2017/02/01/the-great-shelby-holmes/