Posted on September 7, 2017 by trinitygrau

Meet Toby Montrose. For the past several years, he’s never lived in one place for long, being passed around from relative to relative like an old hand-me-down. But here on 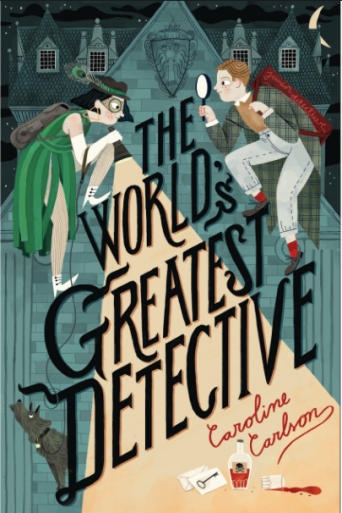 Detective Row, he finally thinks he may have a home, if he can just prove to his Uncle Gabriel that he can be a great detective – or at least a good enough one to keep them from the streets. When a mysterious invitation arrives from his uncle’s old nemesis, the intrepid Hugh Abernathy, Toby takes up the quest to solve the mystery and become the World’s Greatest Detective. But solving this puzzle won’t be as easy as he thought. Who is enemy and who is friend? His neighbors are no longer who he thought they were and he himself is stumped by questions concerning his uncle’s own foggy past. With an annoying new spy-turned-friend named Ivy at his side, Toby will have to soldier through a surprise murder, maneuver twists and turns, conquer a dastardly villain, and maybe – just maybe – prove that he is, after all, the World’s Greatest Detective.

This book was a delight and it was only after I’d finished it that I realized who the author was: Caroline Carlson. For those of you who don’t recognize the name, she is the author of the beloved The Very Nearly Honorable League of Pirates series. I have reviewed the first two of this series here and here, but have not yet reviewed the third – guess that’s a blog post for the future. For now though, I highly recommend you read this book. It will keep you laughing, gasping, and guessing till the very end.

Chime Time! This book is something of a spoof on the image of Sherlock Holmes, with his adventures being published from the point of view of his assistant, and his amazing deduction skills. Have you ever read a book that spoofs Sherlock Holmes or any other famous fictional detectives?